Welcome back. Yesterday I showed you this map-inspired tea cosy in its first stage. It was in a traditional map format which basically means it was flat, it could be read from left to right, right to left, from top to bottom and from bottom to top. Today I would like to show you the piece when it is transformed into its intended purpose- a tea cosy. 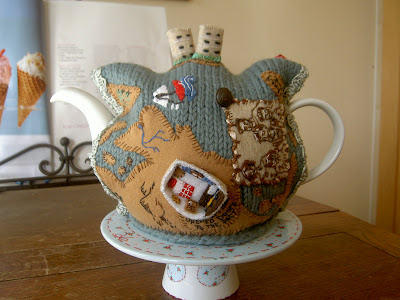 When I had the idea for this piece I was really excited by it. I worked very hard on research, design and the making of all the separate elements that make up the final vision of the piece. I sewed everything into place and I added upholstery trimming to the hem to strengthen its form and also to create a frame or border for the images to sit within. So you can imagine, after doing all that work and I finally get to the stage when I can sew in clasps and snaps to be able to turn this map into a tea cosy, the trepidation I felt when I placed the finished piece over the tea pot. I hoped to the gods of art and design that it would look exciting and interesting rather than an unreadable jumble and a big mess. Thankfully when it was sitting in place I felt satisfied with how it had turned out and that my design had held strong in both formats. 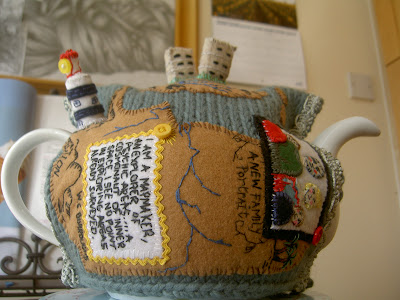 Now instead of being able to read it in its traditional form, it could be read many different ways. The 3D details stood up off the background and demanded attention. It was a traditional map no more, it was now a kind of unique globe that could be viewed from many different angles. 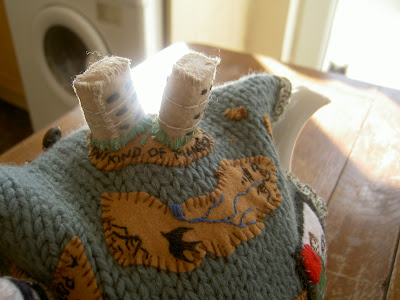 As I said yesterday, the images I chose to use on the piece were from the stories I heard in the conversation I had with the man it was commissioned for. Family life was a big part of the stories I heard and so I decided I would embroider two family portraits; one of his family growing up and one of his own family now. I chose browns, beiges and sepia toned threads for the embroidery of the older portrait to give it a sense of history and of times past. I decided I would embroider his current family portrait in Technicolor and in a more caricatured style. I wanted it to be soft, bright and with a sense of fun about it. 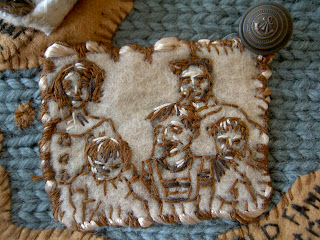 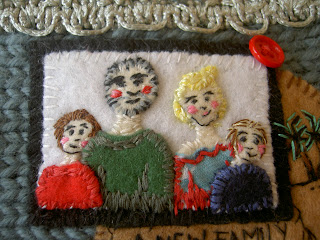 In the old-fashioned maps I used for inspiration for the piece, I found there can be a lovely mixture of images and written text. I find the combination of the two very appealing visually and I wanted to incorporate this into my own work. I found a quote from William S. Burroughs that seemed to suit the tone of the piece perfectly. I had embroidered the writing onto a piece of white felt and used it on the tea cosy as another form of visual and thematic interest. 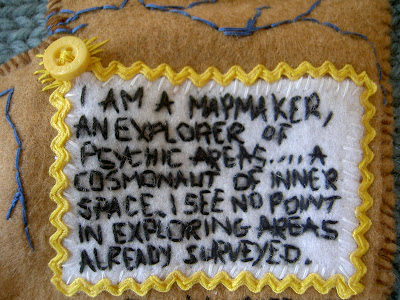 As you can see from the photographs, there is a tiny room on the map. The man had told me a great story about a room he had lived in when he was younger and I wanted to make a representation of it for the piece. I set myself the challenge of making it as small and as detailed as I possibly could. I made a tiny bed, a clock, a window and even a tiny door with door knob included. The idea was not to make an exact replica of the room but just to have something on the tea cosy that symbolised his experience. 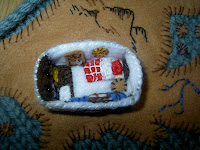 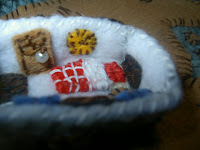 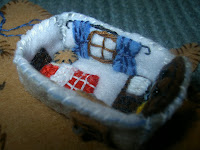 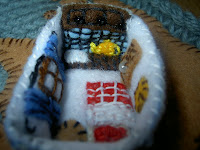 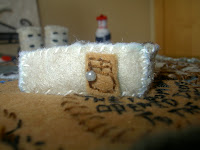 All the details of the piece were based in stories I heard in our conversation. The lighthouse, the tower blocks, the portraits and the room all came from the man himself. I think this is partly the success of the piece. The sharing of his stories generated a visual story in my mind that I then wanted to communicate. The tea cosy is obviously very personal to the man it was made for but I think our interconnectedness as humans makes us interested in each others stories. I think you could feel it is so personal to the recipient that it would not be of interest to anybody else. But my experience in making it has been the opposite. I have found that its unconventional beauty draws people in and makes them want to know what it is about. I think it makes you think about what would be on your own mind map. What would be the symbols and the landmarks? Whose faces would you see? What stories would be told? 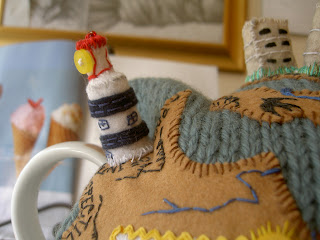 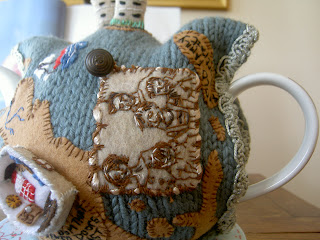