Sometimes I will be asked for a gift voucher to give to someone as a present. The idea is that rather than the giver commissioning a piece for the person, the receiver of the gift can pick his/her own art work to be commissioned. One such recipient of a gift voucher decided they would like a tea cosy as their present. For some reason I was surprised at the request, maybe because he was a man and my inner sexist had emerged. So I sent him on photographs of my previous work so he could get a sense of the kind of things I had made in the past. 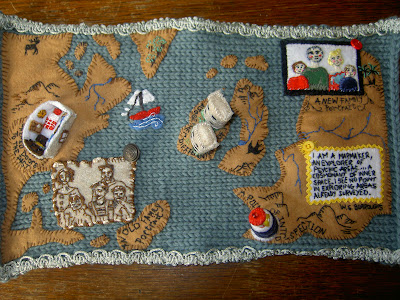 We arranged to meet for a cup of tea and a chat about what he would like from his tea cosy. We had a long talk but not very much of it was about tea cosies, colours, ideas or any of the usual information I try to garner when developing a piece. He shared stories with me about why he wanted the tea cosy which then led to other stories about many other things. 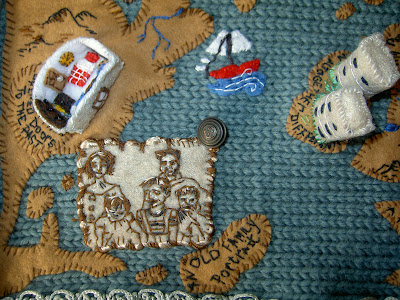 I left his company with a million images, stories and panic about how I was going to turn all this information into, of all things, a tea cosy. I have been challenged before but this seemed like the boss of all challenges. 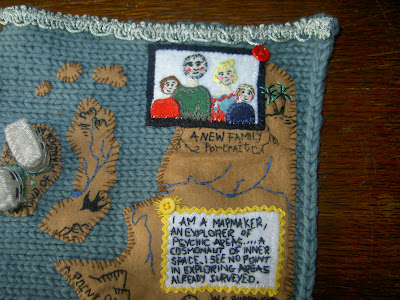 To my total relief because of the wealth of imagery I was presented with, I quickly began to form a plan for the piece in my minds eye. We had discussed the mans interest in maps and so I decided the basis for the piece could be formed like an old fashioned map, the kind that have sailboats, mermaids and monsters illustrated in their seas. 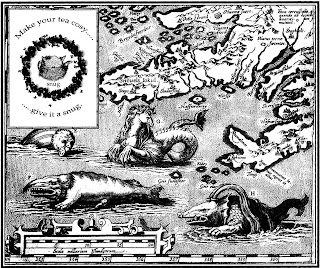 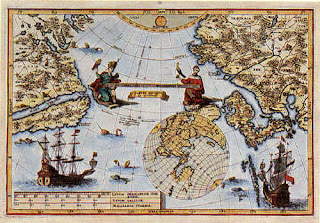 But rather than it be an accurate geographical map, I thought it could be a mind map, a map to chart his stories and his memories from the past. I picked key information from our conversation and decided to incorporate them into the piece. I wanted to scatter them across the landscape like noteworthy landmarks in a journey or expedition. The other key component of the work was the idea that the piece could be laid out flat like a paper map and read that way but then after some nifty needle work and some integral construction the piece could be clipped into place and become a functional and decorative tea cosy. I liked the idea that at one point in time people thought the world was flat but with exploration they found that it was round; the tea cosy represents both forms. I am fascinated by how we, as humans, can feel absolutely assured of something and then with some heroism and the drive to explore we are constantly confronted, not just by one truth, but by many, many truths that challenge our ideas and perceptions about the world. 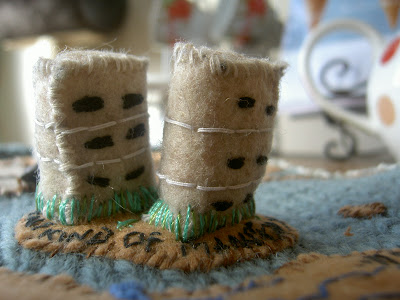 For the tea cosy I liked the transformation of a 2D object into a 3D object aided by the functional reason of its existence, the teapot creates the globe upon which the map can sit. The cosy starts as a piece of art to be observed, it then gets transformed into a functional item but in doing this, it further explores its artistic and creative qualities as it encourages you to view it in a new and challenging way. Art informs function and then the function informs the art. 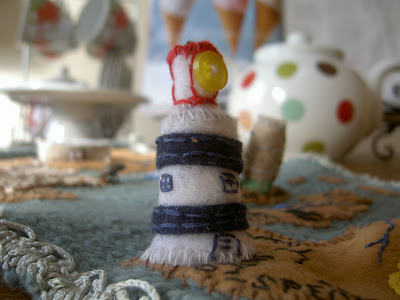 I also explored 2D and 3D forms in the making of the map. The landscapes and family portraits were all embroidered flat and then I made 3D miniature representations symbolising different ideas or memories we had discussed in our meeting. I wanted the map to come alive, to jump off the fabric, to rise up to meet you with unexpected details and things to be continuously discovered. As I said before, I love working in miniature and this idea really allowed me to play and challenge myself in this area. 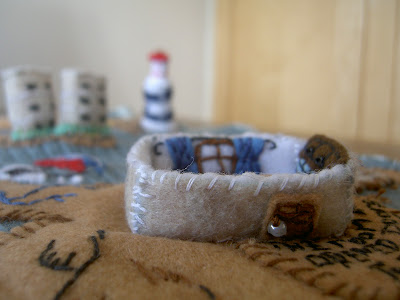 Tomorrow I will discuss with you the details of the piece and the techniques I used to bring this tea cosy together. 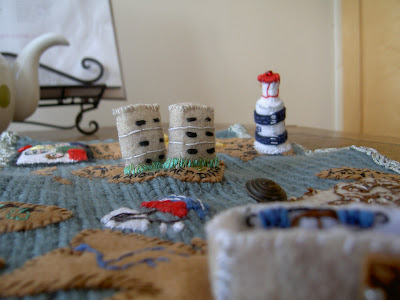